The five mile (8km) circular Heritage Walk starts and finishes at the parking area located past the road bridge on the A4080 approaching Rhosneigr in a westerly direction. This walk starts with a circuit of Llyn Maelog on well-defined footpaths.

Llyn Maelog is a small shallow lake and fringing reedbeds behind the dunes of Tywyn Llyn common land at Rhosneigr. The lake supports good numbers of wintering wildfowl, particularly coot and pochard, while oystercatcher and golden plover overwinter on the peripheral grassland, so don’t forget your binoculars. The lake takes its name from St Maelog, a well-travelled Celtic saint who settled here about 1,450 years ago. The famous nature artist Charles Tunnicliffe found much inspiration in this area, the landscape and surrounding birdlife at Llyn Maelog prompted his most prolific period of painting and much of his work can be viewed at Oriel Ynys Mon, Anglesey’s museum and art gallery in Llangefni.

From the end of the eastern side of the lake, crossing the A4080, following the signs for the Anglesey Coastal Path will lead to Porth Tyn Tywyn and Porth Nobla beaches, family friendly, largely sandy beaches backed by gently sloping dunes, popular with windsurfers, surfers and canoeists.

At the end of Porth Nobla you’ll find the Neolithic burial chamber of Barclodiad y Gawres (Welsh for ‘apronful of the giantess’) It is an example of a cruciform passage grave, a notable feature being its decorated stones.

About 5,000 years ago a group of Anglesey’s first residents somehow moved massive stones and built here one of the nation’s first buildings. It’s the best preserved burial mound of its age in Wales, England, or Scotland.

Welsh legend paints a more colourful story of its origin – two giants, a man and a woman were travelling to Anglesey to build a new home there. The man carried two large stones for the entryway, while the woman carried many smaller rocks, in her apron, as you do…..

Exhausted and frustrated, from their long journey the giantess dropped her load right then and there, creating a strange pile of rocks. So the Welsh called the place Barclodiad y Gawres: “the giantess’s apronful.” Barclodiad itself is a mysterious mix of legend, myths, and messages from the dark past. Like the rest of the island, it’s well worth the visit.

Continue around the mound to Porth Castell, popularly known as Cable Bay. This small cove played an important and historic role in transatlantic communications. In 1855 a telegraph cable line was laid between Cable Bay and Ireland, followed, eleven years later by a transatlantic link between Ireland and the USA. Queen Victoria sent the first official telegraph to James Buchanan, the then President of the United States. The ninety-word message took 16.5 hours to transmit!

Retrace your steps along the Anglesey Coastal Path, back across the beaches – Porth Nobla, Porth Tyn Tywyn and Traeth Llydan (Broad Beach) to the car park at the edge of Rhosneigr. Well done, you deserve a treat, so why not check out one of the many highly rated TripAdvisor restaurants and cafes in Rhoneigr >> Trip advisor restaurants.

Come for the views, stay for the stories.

The Isle of Anglesey is waiting for you to discover its riches with all its beautiful beaches, stunning coastal walks, attractive cuisine and a long and colourful history.

Cable Cottage, Church Bay – sleeps 8 is in a truly amazing location. With panoramic sea views and direct access from the house on to the beach, this is a fantastic holiday home. Heavenly location for children and dogs, relaxing for grown-ups too. The next available date is the week beginning September 10th, 2016.

On the other hand, why not stay in one of our Scandinavian log cabins near Menai Bridge on Anglesey. Pont Cyfrinfa (sleeps 6), Eirianfa (sleeps 6) and Pumpkin Lodge (sleeps 4) great for families with children. Book now for a great bargain with Coastal Holidays. 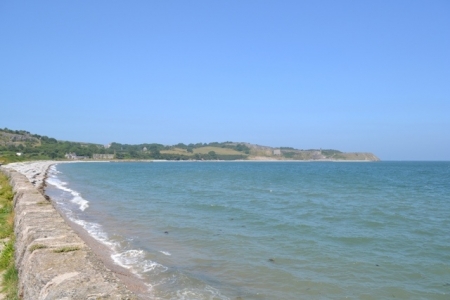